The 8051 micro has been on the scene for a number of years now since the early 80’s.

There are literally hundreds of derivatives.. Ti, Silicon, Atmel, Microchip, Cypress and many many more have come up with several products using this core….. I used Phillips personally. These chips came with a tight boot-loader… With a free program called “Flash Magic” you could simply write a program, compile or assemble to a hex file and flash magic puts it on the device through the serial port.

Boot-loading isn’t a new thing, many devices out today employ a boot-loader… The good old Arduino is a good example of this.

I am going to try and show you how to program an Intel based 8051 micro..

For ease of manufacturing a little development board can be made so you can begin playing.

Begin with a P89C51RD2.. This comes in a 40pin PDIP package and is compatible with flash magic. 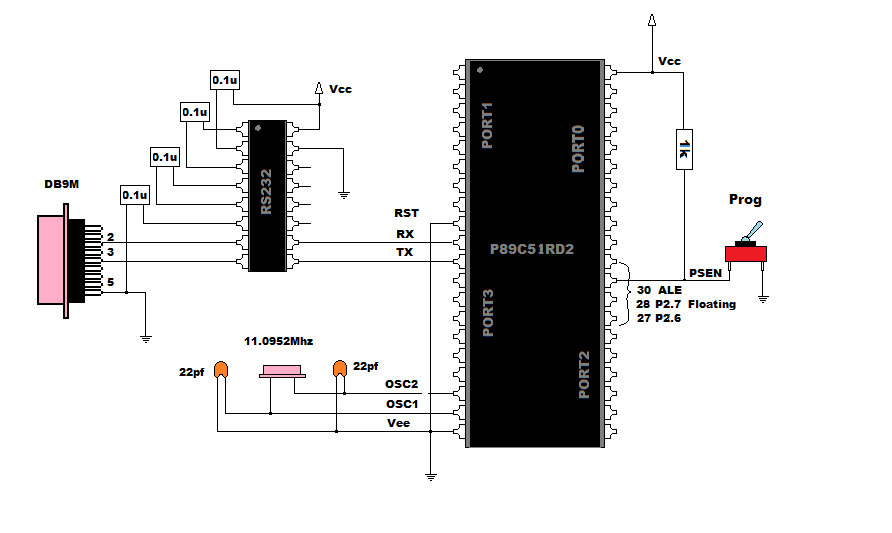 Once you have made you development board, and you have connected it via a serial cable ( You’ll need a USB / Serial for newer PC’s). You are ready to go… Incidentally my board was laid out using a P89C668HBA in a 44 pin PLCC package and not the P89C51RD2, but from here on in it doesn’t matter.

I have also put connectors on every pin so I can use them.. You could for the purpose of the tutorials make three or four other boards that have LED’s, switches, an LCD 16×2 screen and some memory… The memory can be SPI or I2C as I’ll do a software (bit bang) version of both. 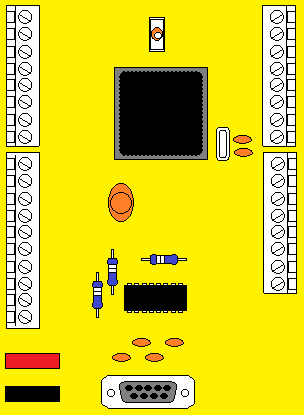 So far I have planned…

After the initial tutorials we’ll combine some of the routines into a library so we can call them whenever needed..

Then a tutorial taking an I2c memory, a I2C ADC, a Toshiba graphical display and a 12 key keypad to make a system that can be used to measure differing voltages and displayed on a graphical screen.

Okay we’ll start with the basics…..

So our first example we’ll use a single LED and limit the current to 10mA… This should be more than enough to see the LED light..

In assembler most operations than needs doing requires the accumulator.. The accumulator is the only register connected to the ALU ( Arithmetic Logic Unit ).. However! To place simple data onto a port pin only requires a direct call..

Similarly to clear the data on the pin is just as simple.

clr P1.0 … Clear the bit in register P1 bit 0.
Add an LED to the circuit… I have also added a switch for the next exercise. 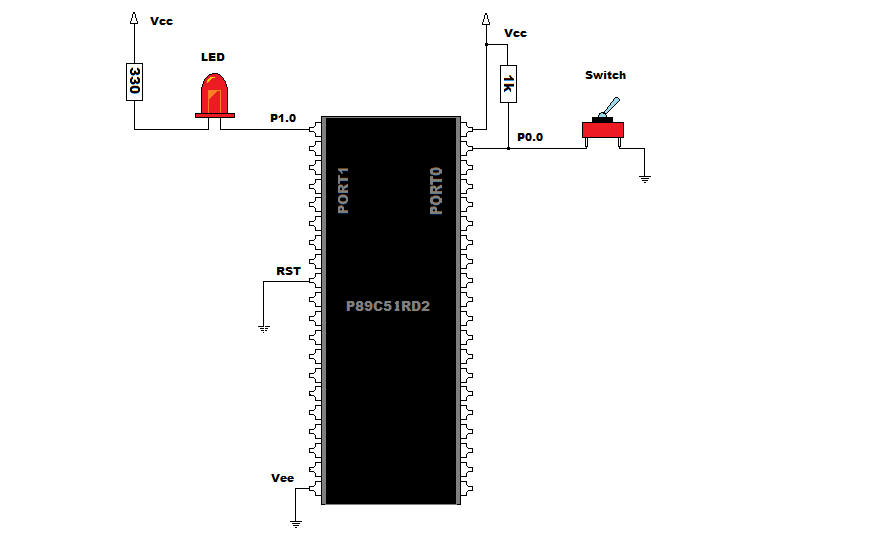 Now before you run ahead and try this for real, remember to current limit the LED. A simple equation to find the correct limiting resistor is needed…. We have “Ohms Law”

We look at the data sheet of a simple LED and see that the forward voltage is about 2 volts, the current we need is 10mA..

The voltage supplied from the micro supply rail is 5 volts we need to drop the voltage to 2 volts to light the LED. A voltage drop of 3 is needed at 10mA..

If voltage = resistance * current, then resistance = voltage / current. Therefore 3volts / 10mA = 300 ohms.. the nearest value of “Off the shelf” resistor is 330, so the current will be smaller at around 9mA.. This will be fine.

Next we need an assembler.. There are many assemblers on the net but ASEM51 will be the best. If you also want to follow the tutorials in C then I suggest SDCC ( Small Device C Compiler ). Both are free… The best way to use these tools is with an IDE ( Integrated Development Environment )

Download and install SDCC and MCU8051IDE and you will be ready to go.. You will also need “Flash Magic” To download hex files to your development board.

If you open MCU8051IDE and type in the program…. Then assemble, you will create a small hex file in the project directory. Here you can simulate the program before you write to the chip. The MCU8051IDE comes equipped with a simulator… This helps with debugging, if the program doesn’t behave the way its supposed to.

Now! The astute amongst you may have noticed that the clock speed of the micro is 11.0592Mhz and the switching on and off of the LED will be so fast it will not be able to light up… As the commands will be executed just over 1uS the complete code will have run just under 6uS..

We will need to slow it down a tad…. If you need to see the LED switching on and off you need to do it below the human threshold which is about 15hz that’s 15 times a second.. But to really see a flashing LED you would need it to be 3 or 4 times a second… so if we stop the micro for 125mS each we will get nearly 4 flashes per second..

So to do this on the micro… To do this there are two ways..

Ok! Tested on the hardware and the LED flashes 4 times a second, just as required..

In the code we have introduced several commands

ACALL = Absolute CALL… This can call a subroutine from within page boundary..
11 bit address space..

DJNZ = Decrement register and Jump if register is Not Zero..
8 bit address space..

There are more jumps and calls depending on the circumstances…

Conditional jumps… JNZ, JZ, JNC and JC.. These work on the Zero flag and Carry flag

Routine calls are ACALL and LCALL..

C is a higher level language than assembler. Using a more readable syntax helps with debugging also the automated low level access make it quicker to write a program.

If you look at the two programs side by side, it doesn’t look any easier. As the tutorials move on you’ll begin to see huge differences in the size and time it takes to program…

We can move on to switched input!! Toggle a switch to light the LED..

Notice that a using constants we need to use the pound ‘#’ to denote a value, otherwise if this is omitted then it uses the address of the register…

To use a pin on the 8051 as an input you must set it high.. The data latch must disable the output FET in the port pin schematics to prevent it being low while an external device pulls it high..

The above program could be achieved without a micro controller, lets make it more interesting!!!

We can now look at using a switch to change LED sequences.. Moving images created by a block of LED’s.. Making it looks as if the LED is moving… We will use lookup table to store different patterns, using the switch we can traverse through the patterns to achieve basic animation.. Remember that the all 8 LED’s cannot consume more that 25mA or the micro will fry! You will need to connect each led via a suitable transistor or current limit all the LED’s to 3mA each, which will be very dim.

To use lookup tables we need to use the data pointer ( DPTR ) register.

Using this register and the accumulator as a offset we can pick each data value as we need it..

Before the analysis, I’ll post the same code in C…

Two Identical programs ( well nearly ). The ASM routine changes the DPTR routine to point at the data byte table ( array ), then loops through all 8 values placing each in turn on the LED port..

Using pointers in C is considered “advanced” programming. However! Using arrays we can get to grips with the way pointers actually work.. I have purposely used three array’s each with 8 elements so I can show how simply pointers can be used… In the ASM program we use..

movc A,@A+DPTR ; MOVe Code byte into Accumulator at number currently held in the ; Accumulator plus the address currently stored in the DataPoinTeR ; register..

We see that DPTR is pointing to Pat1 ( the first data table ) a contains 8 through 1 in each itteration of the loop. All we need to do is swap the value the DPTR register is pointing to to change the array.

In C we have..
unsigned char* patternPtr; // This will hold the address of each array being used.

PatternPtr = &Pattern1[0]; // This will point at the first byte in the array so we can retrieve it.

The ampersand is a reference operator… ‘&’ this means “The address of”.. Once we have created the pointer and pointed to the array.. patternPtr and Pattern1[0] are essentially the same thing. Pattern1[3] will retrieve the same value as patternPtr[3]… We only need to swap the address of the pointer to access all three arrays. Why do we need the pointer? Consider this code..

Pass the array to the function and as we don’t need to access individual elements we can just increment the pointer rather than changing the element reference making it easier to traverse through the array.

The next tutorial is working on the keypad, 7 segment displays and motors..

I’ll get it posted soon.