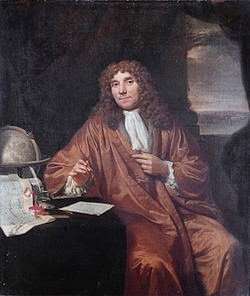 Leeuwenhoek ( 1632-1723 ) first encountered magnifying glasses when he was sixteen. He was working in Amsterdam as an apprentice and bookkeeper to a Scottish textile merchant, where magnifying glasses were used to count thread densities for quality control purposes. He is commonly known as “the father of Microbiology” and considered as the first microbiologist.

In April 1673 he reported his first observations – Bee mouthparts and stings, a human louse and a fungus – to the Royal Society, which was published in philosophical Transactions. He was elected a member of the Royal Society in 1680 and continued his associations, writing hundreds of letters to the Society during his lifetime.

Experiments on pepper, to discover if its heat was caused by spikes, caused him to put peppercorns in water and let them soften for three weeks. On 24 April 1676 he observed the water and was surprised to see tiny organisms; the first bacteria observed by man.

Leeuwenhoek’s letter announcing this discovery caused such doubt at the Royal Society that he had to enlish an English vicar, as well as jurists and doctors, to confirm that his report was based on true observations. Robert Hooke later repeated the experiment and was able to confirm his discoveries.

As well as being the father of microbiology, Leeuwenhoek laid the foundations of the plant anatomy and became an expert on animal reproduction. He also discovered sperm, blood cells and microscopic nematodes, and studied the structure of wood and crystals. He developed a way to grind powerful lenses, and made over 400 microscopes to view specific objects, only nine of which survive today.

His attention was then drawn to spermatozoa in the semen of a man suffering from venereal disease; his student thought that it was a symptom of corruption. Leeuwenhoek was already aware of spermatozoa, and knew it was normal. After an experiment he ‘performed without defiling’ himself he reported the findings to the Royal society in November 1677, requesting them not to publish the letter, believing it would lead to disgust or scandal. They published anyway. He considered this discovery to be one of the most important in his career. Over the next forty years he examined and described the spermatozoa from molluscs, fish, amphibians, birds and mammals, coming to the novel conclusion that fertilization occurred when the spermatozoa penetrated the egg.