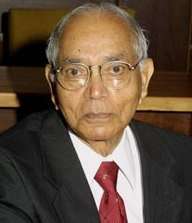 C. R. Rao is the son of C.D. Naidu and A. Laxmikantamma. After the retirement of his father, whole family settled down in Vishakapatnam in Andhra Pradesh. From his earliest years, Rao had an interest in mathematics and decided to meke career in mathematics. He studied in schools at Gudur, Nuzvid, Nandigama and Visakhapatnam, in Andhra Pradesh. After completion of high school, he joined the Mrs. A.V.N. College at Vishakapatnam for the Intermediate course. He completed his M.A. in Mathematics from Andhra University with first rank in 1941, and M.S. degree in statistics from Calcutta University with first class in 1943. He married Bhargavi who has two master’s degrees, one from Banaras Hindu University in History and another from the University of Illinois, USA, in Psychology, and a Bachelor’s degree in Teacher’s Training. She worked as a professor of psychology at Jadavpur University, Kolkata for a number of years.

Dr. C. R. Rao started his working career with Indian Statistical Institute (ISI) at Calcutta as a research scholar in1943. He was invited to work on a project at the Museum of Anthropology and Archeology at Cambridge University, UK, which required the statistical methodology developed by P.C. Mahalanobis,the founder of ISI. Based on the work he did, he acquired his Ph.D. in 1948 from Cambridge University with R.A. Fisher, the father of modern statistics, as his thesis advisor. After a few years, in 1965, the university awarded him the prestigious Sc.D. degree based on a peer review of his research contributions to statistics. He left ISI in 1978 and joined the University of Pittsburgh. He worked there for eight year and after that he moved to the Pennsylvania State University as Eberly Professor of Statistics, where he continues to work as the Director of the Center for Multivariate Analysis (CMA).

The C.R. Rao Awarded for statistics was instituted in his honour, to be given once in two years. In 2002, he was awarded the National Medal of Science of the U.S.A. The advance Institute of Mathematics, Statistics, and Computer Science in the Osmania University Campus have been named after him. Times of India declared on dated 31 December 1988 that C. R. as one of the 10 top Scientist of India.