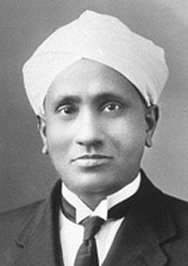 Dr. C.V. Raman was one of the greatest scientists of India, who was awarded the 1930 Nobel Prize in physics for his work on the scattering of light and for the discovery of the ‘Raman Effect’, which is named after him. Chandrasekhar Venkata Raman, commonly known as C.V. Raman was born on November 7, 1888 at Tiruchirapalli in Tamillandu. His mother tongue was Tamil. He was the second children of Chandrasekhar Iyer and Pravathi Ammal. His father was a lecturer in mathematics and physics. Raman was a very brilliant student right from his childhood.

At an early age, Raman moved to the city of Vishakhapatnam, which is situated in state of Andhra Pradesh, where his father accepted a position at the Mr. A V N College. Raman’s academic brilliance was established at a very young age. At the age of twelve, he finished his matriculation education and entered Mr. A V N College and two year later moved to the prestigious presidency college in Madras (Chennai). When he was the age of fifteen he finished at the head of the class too received B. A. with honours in physics and English. In those days, it was a system of government that students who did well academically were typically sent to abroad (England) for additional studies. Because of Raman’s poor health, he was not allowed to go abroad and he continued his studies at the same college. In 1907, barely seventeen, Raman received his Master degree with honors. He got first position in the University in M.A. In the same year, he married with Lokasundari Ammal and with whom he had one son, Radhakrishnan.

He completed his education in Visakhapatanam and Madras (Chennai). After getting top ranking in the Financial Civil Service competitive Exam, he was appointed as Deputy Accountant general in Calcutta. At the time of his graduation, there were few opportunities for scientists in India. This forced him to accept a position with the Indian Civil Services as an Assistant Accountant General in Calcutta. While there, he was able to sustain his interest in science by working, in his remaining time, in the laboratories of the Indian Association for the Cultivation of Science. He studied the physics of stringed instruments and Indian drums.

In 1917, he was offered the professor of Physics at the Calcutta University, and he decided to accept this opportunity. After 15 years service at the Calcutta University, he left that job and shifted to Bangalore and became the Director of the Indian Institute of Science, where two years later he continued as a professor of physics. In 1947, the new Government of Independent India appointed him as the first National Professor. He also worked in the field of magnetic attraction and theory of musical instruments. He worked out the theory of transverse vibration of bowed strings, because of superposition velocities. This does a better job in explaining bowed string vibration over Helmholtzs approach.

Professor C V Raman was also the first to investigate the harmonic nature of the sound of the Indian drums such as the tabla and the mridanga. In 1930, for the first time in its history, an Indian scholar, educated entirely in India has received highest honour in science, the ‘Nobel Prize’ in physics. In 1943, he founded ‘Raman Research Institute’, near Bangalore. His discovery of the ‘Raman Effect’ made a very distinctive contribution to Physics. He was also conferred the hishest title of ‘Bharat Ratna’ in 1954. The ‘Raman Effect’ was a demonstration of the ‘Collision’ effect of light bullets (Photons) passing through a transparent medium, whether solid, liquid or gaseous. Raman was also awarded the ‘Lenin Peace Prize’ in 1957. India celebrates National Science day on 28th February every year to commemorate Raman’s discovery.

He retired from the Indian Institute in 1948 and after one year, he established the Raman Research Institute in Bangalore, served as its director and remained active there until his death, at the age of eighty-two. Sir Venkata Raman died on Nevember 21, 1970 at Bangalore, India. We should proud on him.