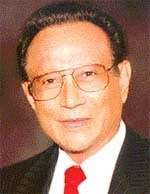 Dr. Mani Bhaumik is a famous physicist from India who helped to develop the first excimer laser at the University of the Californis’s famous Northrop Corporation Research and Technology Center (NCRTC). This is the class of laser that would eventually eliminate glasses or contact lenses in many cases requiring vision correction (the procedure takes less than a minute and is going like wildfire today). Dr. Bhaumik was elected by his peers to be a fellow of the American physical society as well as the Institute of Electrical and electronics engineers. Dr. Mani lal Bhaumik is the elder son of the famous Bhumik family. The high-profile physicist, who has been working with excimer laser ray for many years, actually hailed from Midnapore district of west Bengal and was a resident of Mahisadal at Tamluk.

Dr. Bhaumik was born on the mud floor in a poor village in Bengal to a father who was a steadfast Gandhian and a freedom fighter, Mani, suffered the hardships of dictatorial ill-treatment meted out by the British to his family. Mani describes the gruesome realities of the struggle made worse by a killer cyclone in 1943, when dogs feeding on human corpses appeared healthier than any human around. Indeed, when hell is brought earth, the dogs are more likely to survive than the people.

Dr. Mani lal Bhaumik got B. Sc degree from Scottish Church College and an M. Sc. from the University of Calcutta. He won the attention of Satyendra Nath Bose at IIT (co-creator of the Bose-Einstein Statistics) who encouraged his prodigious curiosity. Bhaumik also got Ph.D in Physics from the Indian Institute of Technology at Kharagpur. His alma mater, IIT Kharagpur awarded him an honorary D. Sc. Degree for lifetime academic achievement.