NITI Aayog to sow spirit of innovation in schools with Atal Tinkering Labs.If we need to grow at 10% for the next 30 years, we have to make Innovators of our school children.NITI Aayog, along with @intel marches ahead to create the best tinkering labs for children in India

5 Advanced Humanoid Robots You Have to See to Believe

Tutorial: Making a PCB with FerricChloride(FeCl3) AT HOME 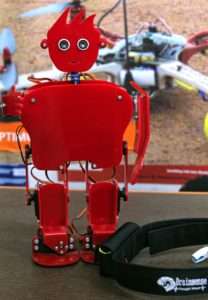 ● Technology of the future! Best and most amazing inventions, cool gadgets, futuristic new technology, tech inventions and things you didn’t know existed. ● These inventions are either being developed or sold at the moment, we may even see them being regularly used in the future.     Links Gloveone: http://www.gloveonevr.com/ Real Booty Music: http://realbootymusic.aiaiai.dk/ Volocopter: http://www.e-volo.com/ Fove: http://www.getfove.com/ Nuimo: http://senic.com/

The beautiful girl (circled) is a ROBOT. You might do a double take when you see this new interactive robot, as it ‘looks very much like a real woman’. Dubbed ‘robot goddess’, Jia Jia has the long flowing locks and rosy red cheeks as a human, but is being taught deep learning abilities.     This humanoid is designed with natural eye movement, speech which is synced with its lip movements and refers to its male creators as ‘lords’. The 13th World Robot Olympiad will be held in India for the first time ever. It will be organised jointly by NCSM under the aegis of Ministry of Culture and India STEM Foundation (ISF) from 25 November to 27 November 2016 at the India Expo Mart, Greater Noida.   More than 2000 students from 54 countries will participate in the event to find innovative ways, using robotic technology, to reduce, manage and recycle waste.   The theme for the 13th World Robot Olympiad is Rap the Scrap. The theme is in line with ‘Swachh Bharat Mission’ of the Indian government…. Technology is critical for innovation, yet schools struggle to get students interested in this area. Could teaching robotics change this?   The Queensland government has just announced plans to make teaching robotics compulsory in its new curriculum – aimed at students from prep through to year 10.   Robotics matches the new digital technologies curriculum, strongly supported by the university sector and states, including Victoria.   But while, worldwide, there are increasing initiatives such as the Robotics Academy in the US to teach robotics in schools, Australia isn’t doing enough to get it taught in schools.   To explain why…

The Top Five Unexpected Benefits of Robotics in the Classroom

As teachers, we’re well aware that STEM education is essential in preparing students for today’s world of non-stop innovation. In my 13 years of teaching I’ve seen many curriculum fads come and go, but the use of robotics in the classroom has proven to be a consistent and surefire way to teach students the STEM skills needed to prepare them for the future job market. I’ve seen firsthand how it teaches students 21st-century skills including coding, engineering and the scientific method in a fun and engaging way. However, there are so many other incredible things that I’ve watched my students…

UBTECH Robotics has launched a new line of Jimu Robot kits designed to enhance the STEM skills and interest of kids ages 8-14. The Buzzbot and Muttbot Kit, Explorer Kit and Inventor Kit allow kids to build robots such as penguins, rhinos, elephants and humanoids. The programming is done with Blockly code in the companion Jimu Robot App.     There’s also an online Jimu community, UBTECH says, where kids can share their creations and check out what other users have created. There will be instructions on how to build, program and control Jimu Robots in both the online community…

20% of All Vacuums are Robots

From a sales standpoint, robot vacuums are the most successful consumer robot ever. Robot vacuums have certainly simplified, not quite eliminated, one of the most daunting household chores: cleaning. So the success makes sense.     But just how popular are robot vacuums? At TechCrunch Beijing, iRobot CEO Colin Angle said 20 percent of the world’s vacuum cleaners are robots. Of those that are robots, 70 percent are from iRobot, which has sold 14 million Roombas to date.   As Angle said, iRobot “has a long lead in terms of working on the problem, and because it’s focused on consumer… Researchers at MIT Computer Science and Artificial Intelligence Laboratory (CSAIL) and the National University of Singapore have developed a self-driving scooter that uses the same sensors and software that had been used in previous autonomous car and golf cart tests.     Here’s the idea. Self-driving cars can only transport a mobility-impaired person part of the way – from their home to a mall, let’s say. How would that person get around the mall? That’s where a self-driving scooter comes into play. The researchers say the self-driving scooter works just as well indoors as it does outdoors.   “We were… Building robots is fun, easy, and can be done by nearly anyone. My class guides you through four beginner projects, introducing new knowledge and skills along the way.   During the first half of the class you will build three simple bots which will familiarize you with the fundamentals of robot-building. Over the second half of the class you will build an advanced telepresence robot using a microcontroller and sensors.   I hope you will join me in the wild world of robotics. Enroll to get: 14 lessons accessible anytime, anywhere Learn by doing with hours of project focused instruction…

While it may seem intimidating at first, learning electronics is fun and easy.   In the first three lessons I introduce new tools, skills and concepts. In the remainder of the class, a new electronic component is introduced in each lesson.   In addition to providing an overview of an important aspect of electronics, each lesson concludes with a project. This allows you to learn about basic electronics in a hands-on manner.   I hope you will take the time and come build a circuit with me.   Enroll to get: 11 lessons accessible anytime, anywhere Learn by doing with…

In this video I will show you how important protection circuits are for LiPo batteries and what will happen if you accidentally overcharge or over discharge your battery or even create a short circuit. There are a lot of different kinds of robot grippers (end effectors). The most common strategy when designing a robot hand is to try to replicate the human hand. However, in 2010 researchers at Cornell University and University of Chicago developed a unique approach. They created an amorphous gripper that was able to mold itself to the object that it wanted to pick up. This kind of gripper is much more versatile. In this project, I am going to show you how to make your own DIY universal gripper for your robots.   Background: How It Works   This gripper works…