With 3D printing now over three decades old, a growing number of researchers are looking ahead at the next logical step: “4D printing” is the popular science term for 3D printed objects that transform over time. Not just any random transformation, 4D printing is so innovative precisely because of its design parameters. Structures are pre-programmed to respond especially to a stimulus. While 4D printed materials such as shape memory alloy and electroactive polymers have been paving the way for some time, a group of scientists at the Swiss Federal Institute of Technology Zurich (ETH Zurich) have been pushing the envelope even further.

Professor Kristina Shea, head of the Engineering Design and Computing Lab at ETH Zurich, has begun developing flat components that can be folded into three-dimensional objects later on, as well as load-bearing 4D printed objects. 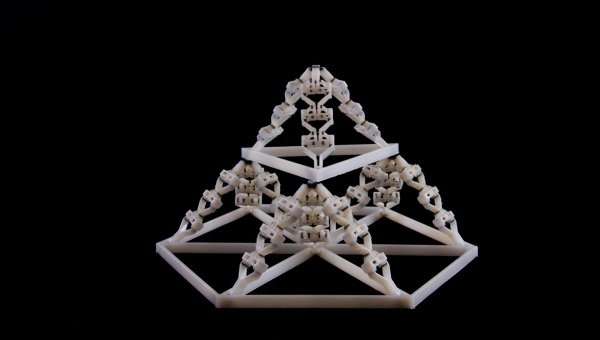 The first researcher to create these kinds of weight-supporting 4D printed objects, Shea and her lab group are particularly focused on perfecting the construction principle that allows them to control the objects’ deformations — down to a tee. “The flat structures we produce do not change their configuration randomly, but rather exactly in the way we design them,” says Tian Chen, a doctoral student in Shea’s group. The ETH Zurich team designs the structures around an actuating element with two possible states: retraction or extension. With the individual elements able to assume only one of these two potential states (ie the elements can retract or extend), researchers can predict the stable 4D form that the structure will ultimately assume.

Additionally, a simulation software is under development that will allow Shea to accurately predict the shape and force that must be applied to produce the desired deformation. Objects can then be designed accordingly.

The ETH Zurich group uses a state-of-the-art multi-material 3D printer for manufacturing their structures. While the system allows for printing in up to 40 different materials, the objects made by Shea and her team only use two: a rigid polymer that comprises most of the structure, and an elastic polymer for the moving parts. Astoundingly, all parts are printed in a single step.

“4D printing has several advantages,” explains Shea. “Printing a flat initial form with rigid and elastic sections in a single step is highly efficient. It would be much more complex and time-consuming to produce the three-dimensional object or assemble it from separate components.”

Possible applications are open-ended: aerospace is one viable option, but the ETH Zurich scientists are also looking into ventilation systems, mechanisms for opening and closing valves, or medical applications such as stents.

For the moment, Shea and her team are reconfiguring these structures manually, but they are already working on a drive for extending the structures in reaction to temperature. The development group also reports it may be possible to control the 4D printed objects with compressed air or humidity.