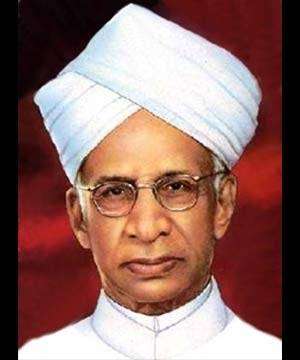 Sarvepalli Radhakrishnan was born on September 5, 1888 at Tirutani, Madras in a poor Brahmin family. As his father was poor Radhakrishnan supported most of his education through scholarships. Dr. Sarvepalli Radhakrishnan had his early education at Gowdie School, Tiruvallur and then went to the Lutheran Mission School in Tirupati for his high school. He joined the Voorhee’s College in Vellore and later switched to the Madras Christian College. He chose Philosophy as his major subject and did his B.A. and M.A. in it.

After completing his M.A., Sarvepalli Radhakrishnan, accepted an Assistant Lectureship at the Madras Presidency College in 1909. In college, he mastered the classics of Hindu philosophy, namely the Upanishads, Bhagvad Gita, Brahmasutra, and commentaries of Sankara, Ramunuja and Madhava. He also acquainted himself with Buddhist and Jain philosophy and philosophies of Western thinkers such as Plato, Plotinus, Kant, Bradley, and Bergson.

Sarvepalli Radhakrishnan was called to Oxford University, to deliver lectures on Hindu philosophy. He used his lectures as a platform to further India’s cause for freedom. He also argued that Western philosophers, despite all claims to objectivity, were biased by theological influences from their wider culture. He showed that Indian philosophy, once translated into standard academic jargon, is worthy of being called philosophy by Western standards. He thus placed Indian Philosophy on world map.

His contribution towards the field of education earned Dr. Radhakrishnan several awards, including the Bharat Ratna. He even received the Knighthood from the British emperor King George V in 1931 for his excellence in teaching. Three decades later, Dr. Radhakrishnan was even honored with an ‘Order of Merit’ by the royal folks of Britain.

In 1975, towards the end of his life, Radhakrishnan was felicitated with a ‘Templeton Prize’ by the well-known ‘Templeton Foundation’. However, the generous scholar donated the entire amount earned through the Templeton Prize to the ‘Oxford University’.

3. His Father’s Was opposed To His Education

Dr. Sarvapalli Radhakrishnan was born into an economically backward family in a village around the border of Tamilnadu and Andhra Pradesh. His father wanted him to turn into a priest at a temple rather than study at an institutuion, but destiny had other plans. The young Radhakrishnan enrolled into a school at Thiruthani and eventually became one of the most learned Indians.

4. A Sweet Tribute By His Students

After a teaching stint at Mysore University, Dr. Radhakrishnan was moving to Calcutta on his next assignment. His beloved students bid him farewell by transporting Dr. Radhakrishnan in a flower carriage to the railway station. This carriage was propelled by these students who physically pulled it till its destination.

A renowned English scholar of the 20th century, named H.N Spalding had become a great admirer of Sarvapalli Radhakrishnan, after hearing the latter’s speeches in England. Dr. Radhakrishnan’s words motivated Spalding to initiate a chair in the world famous Oxford University in honor of ‘Eastern Religions and Ethics’. This division of the Oxford offers grants for those who conduct research on religious studies.

Dr. Radhakrishnan had penned various books on philosophy and even taught the subject at the Madras University. He is known as one of the best philosophers India has produced till date and was well-known even overseas. Famous British Philosopher and historian Bertrand Rusell had once said that Radhakrishnan being appointed as the President of India would be the ‘Greatest honor to philosophy’.

7. His Tryst With The Soviet Union & UNESCO

Dr. Radhakrishnan was given the responsibility of being India’s ambassador to Soviet Union, which was a challenging task. Not many know that he was also appointed the chairman of UNESCO’s executive board.

It is believed that during a dinner in London, a British citizen remarked that all Indians are black skinned. Dr. Radhakrishnan gently replied to this comment by saying that “God once baked a piece of bread more than what was needed and it was known as the so called ‘negro’. God’s next experiment at baking was undercooked, which was known ‘European’. The almighty tried a final experiment where he baked the bread to the ideal extent and it was termed ‘Indian’.

This eminent teacher was appointed as the Vice Chancellor of ‘Benaras Hindu Unviersity’ in 1939, when the nation was still under British rule. The British Governor of the region back then, Sir Maurice Hallet, wanted to turn the University campus into a war hospital, which was the latter’s way of responding to the ‘Quit India Movement’ started by Mahatma Gandhi. Dr. Radhakrishnan strongly opposed this politically motivated thought of Hallet, as a result of which financial support to the university was stalled. Dr. Radhakrishnan personally approached philanthropists and thinkers across the country to raise funds, in a bid to keep the university functioning.

10. His Amusing Behavior At The Rajya Sabha

Many have claimed that when the atmosphere inside the Parliament house becomes chaotic with political leaders arguing with each other, Dr. Radhakrishnan used to calm down the heated atmosphere in an unusual way. He would recite verses from the Bhagvad Gita or the Bible to instill discipline within the crowd. Former Indian Prime Minister Jawaharlal Nehru had quoted that ‘Dr. Radhakrishnan made the parliament sessions seem more like family gatherings’.