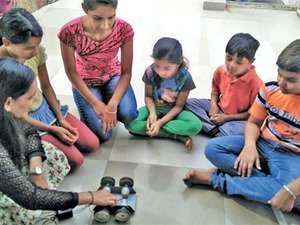 Sixteen-year-olds making profound statements is rare, rarer still is they talking about responsibilities, but rarest is the spirit of taking others along as they grow, that too when they themselves have limited resources. Meet the bunch of teenagers who consider themselves privileged, so privileged that they feel it’s their responsibility to share that they have and others don’t. For almost a month now, six students— Pallavi Solanki, Ankush Soni, Aadit Patel, Siddharth Jadeja and Mitesh Suthar of class XI (Science) and Jatin Dabhi of class IX—have been mentoring students of other schools, living near their homes, showing them how to assemble a robotic car or putting together an electric circuit to make an LED bulb work.

Their school, Sheth Amulakh Vidyalaya, was among the six from city chosen for Atal Tinkering Lab (ATL), a part of Atal Innovation Mission (AIM) which is an initiative by government of India under the Niti Aayog. Across India, 941 schools were selected for ATL where students get an opportunity to work with tools and equipment that help them understand concepts of science, technology, engineering and math (STEM). The ATL at their school became operational last year. “Students of other schools are not lucky enough to have teachers helping them learn robotics and other advanced subjects. It is the responsibility of the privileged to help those who are not,” says Pallavi.