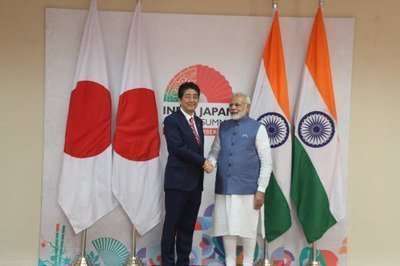 NEW DELHI: India and Japan will work together to introduce artificial intelligence and robotics in the defence sector, the next level of strategic cooperation between the two Asian partners.

Kentaro Sonoura, national security adviser to PM Shinzo Abe, told TOI in an exclusive chat, “You should expect to see increased bilateral cooperation between us to develop unmanned ground vehicles (UGV) and robotics.”

The strategic sphere is where the bulk of India-Japan convergence lies. After the nuclear agreement was ratified by the Japanese parliament late 2017, Sonoura said India and Japan would be setting up a joint task force for commercial agreements by the end of January. With the legislation behind them, the Japanese minister said Tokyo was keen to get this going. “The two PMs agreed to launch a working group, which will work on cooperation between nuclear companies. Japan’s intention is to start this quickly, possibly by the end of this month,” he said.

With an aggressive and expansionist China growing as a challenge to both India and Japan, the two countries are increasingly looking at the world from a similar lens. While the latest buzzword in international geopolitics, ‘Indo-Pacific’, might sound American, its actually Japanese in origin, having been articulated by Abe himself as far back as 2007.

In 2018, Japan’s is aiming for a “free and open Indo-Pacific”, a theme Sonoura expounded on at the recent Raisina Dialogue. This, he told TOI, was a coming together of Japan’s Indo-Pacific policy and India’s Act East policy. “We need to share the importance of rule of law and freedom of navigation among related countries. The next step is infrastructure development based on global standards, so that connectivity among countries is increased. The third step would be maritime law enforcement and disaster management that would ensure the stability and prosperity in the Indo-Pacific region. Therefore, we would like to connect and combine our Indo-Pacific strategy and India’s Act East policy as a one big picture. That’s the synergy we seek,” Sonoura said.

This is the kind of grand strategy that incorporates a stronger bilateral relationship as well as a multilateral one, between Japan-India-US, Japan-US-Australia and the Quadrilateral, Japan-US-India-Australia, seeking to tilt the strategic balance away from China.

Working with India in the quadrilateral, Sonoura said, the aims were slowly crystallising. “Among these four countries, we have the same standards in terms of maritime strategy and basic values. So it’s important to realise these values – non-proliferation, humanitarian assistance and disaster relief. Its important to utilise the strengths of these countries and use it. Rather than frameworks, its important what we can do – to create concrete results which should be visible to the world,” he said. For India, the key aims of the quadrilateral is to come together on non-proliferation and on freedom of navigation.

To counter China’s growing influence in India’s neighbourhood, India has encouraged the presence of Japan and the US in South Asian countries, actions that might have elicited mild protests earlier. Consequently, New Delhi was remarkably quiet when Japanese foreign minister Taro Kono recently visited Pakistan, Maldives and Sri Lanka, increasing Japanese presence in these countries. Japan has already ramped up its involvement in Bangladesh and Myanmar, both countries on China’s radar.

Questioned on this, Sonoura said, “Foreign minister Kono visited Maldives for the first time and Sri Lanka for the first time in 15 years. Last year I visited Mauritius, Madagascar, Kenya and Mozambique. If you place this within the rubric of Japan’s Indo-Pacific strategy, you will get the larger picture.”

In Islamabad, Sonoura said, the Japanese message was clear that Pakistan had to take action on terrorism and terrorists. “With Pakistan, we have an older relationship. But in terms of counter-terrorism, our foreign minister told the Pakistanis they need to do more,” he said.