Just Imagine It, Design It and You Can Have It…

By Robolab Technologies In 3D printers

Manufacturing process is basically a complex activity, concerned with people who’ve a broad number of disciplines and expertise and a wide range of machinery, tools, and equipment with numerous levels of automation, such as computers, robots, and other equipment. Manufacturing pursuits must be receptive to several needs and developments.

Beside above, all the future technicians must understand the basic needs of workshop routines in terms of man, equipment, material, methods, revenue and other infrastructure conveniences needed to be placed properly for maximum shop or plant layouts and other support solutions effectively regulated or positioned in the field or industry within a properly planned manufacturing firm. (SLA or SL; also known as stereolithography apparatus, optical fabrication, photo-solidification, or resin printing) is a form of 3-D printing technology used for creating models, prototypes, patterns, and production parts in a layer by layer fashion using photopolymerization, a process by which light causes chains of molecules to link together, forming polymers. Those polymers then make up the body of a three-dimensional solid. Research in the area had been conducted during the 1970s, but the term was coined by Charles (Chuck) W. Hull in 1986 when he patented the process. He then set up 3D Systems Inc to commercialize his patent. 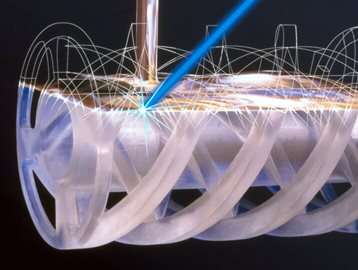 Selective laser sintering (SLS) is an additive manufacturing (AM) technique that uses a laser as the power source to sinter powdered material (typically metal, plastic, composites), aiming the laser automatically at points in space defined by a 3D model, binding the material together to create a solid structure. It is similar to direct metal laser sintering (DMLS); the two are instantiations of the same concept but differ in technical details. Selective laser melting (SLM) uses a comparable concept, but in SLM the material is fully melted rather than sintered, allowing different properties (crystal structure, porosity, and so on). SLS (as well as the other mentioned AM techniques) is a relatively new technology that so far has mainly been used for rapid prototyping and for low-volume production of component parts. SLS technology is in wide use around the world due to its ability to easily make very complex geometries directly from digital CAD data. While it began as a way to build prototype parts early in the design cycle, it is increasingly being used in limited-run manufacturing to produce end-use parts. One less expected and rapidly growing application of SLS is its use in art.